$5 National Bank Notes. Share Yours US and World Currency >
Join the conversation

Appreciate the comments MEC.  The 4th NB BB is from the late Bob Cochran's BB collection, a friend and my STL mentor when I started collecting..  Right after he got it, he showed it and told me the seller had purchased it off a bid board...musta been one heck of a bid board,   I think its the only bank in MO that received a circus poster layout and it is unique for the bank, at least so far.  There are 2 BB $5s in the census but the other has a design with the earlier "patent letter" layout (plate letter C vs H).  I'd love to have a crack at the earlier note someday; also low grade but what a pair!.
Always interested in St Louis MO & IL metro and Evansville IN paper money, scrip, financial docs, banking ephemera, etc.  Also collect Latvian 1915 - 1940 city and national paper money by block letter/variety
Quote 1 1
jordon Senior Member 95 posts
jordon Senior Member 1576465326
stlnats wrote:
The note prompted me to actually research the bank at National Archives and to learn about the use of engraved sigs both in general and on this specific note.

I've been collecting Nationals for a few years but only found out about engraved sigs recently. What did you learn at the National Archives? Are there any articles in Paper Money that have more information?
Florida and Washington state Nationals; engraving errors and varieties; courtesy autographs
SPMC LM449
Quote 1 1
stlnats Senior Collector 652 posts
stlnats Senior Collector 1576469008
jordon wrote:

I've been collecting Nationals for a few years but only found out about engraved sigs recently. What did you learn at the National Archives? Are there any articles in Paper Money that have more information?

NA has the Comptrollers records, including organization, examination and correspondence, for most of the national banks thru about 1913 so there was  ton of history I could extract.  Also they have the Bond and Currency ledgers which show receipt of currency from the BEP and issuance/redemption of notes to the bank.  I also came across a ledger which recorded the date a given bank requested sigs be added to their printing plates; those dates can be correlated with the Currency ledgers to provide which sheet serial was printed after addition of sigs to a sheet.  Its been a while since I was in DC so am not familiar with the current procedures to access NA's resources.

Stlnats ..thanks for history lesson and interesting notes. Excellent post. Anyway, here’s my only $5 small size. Thanks for sharing everyone. 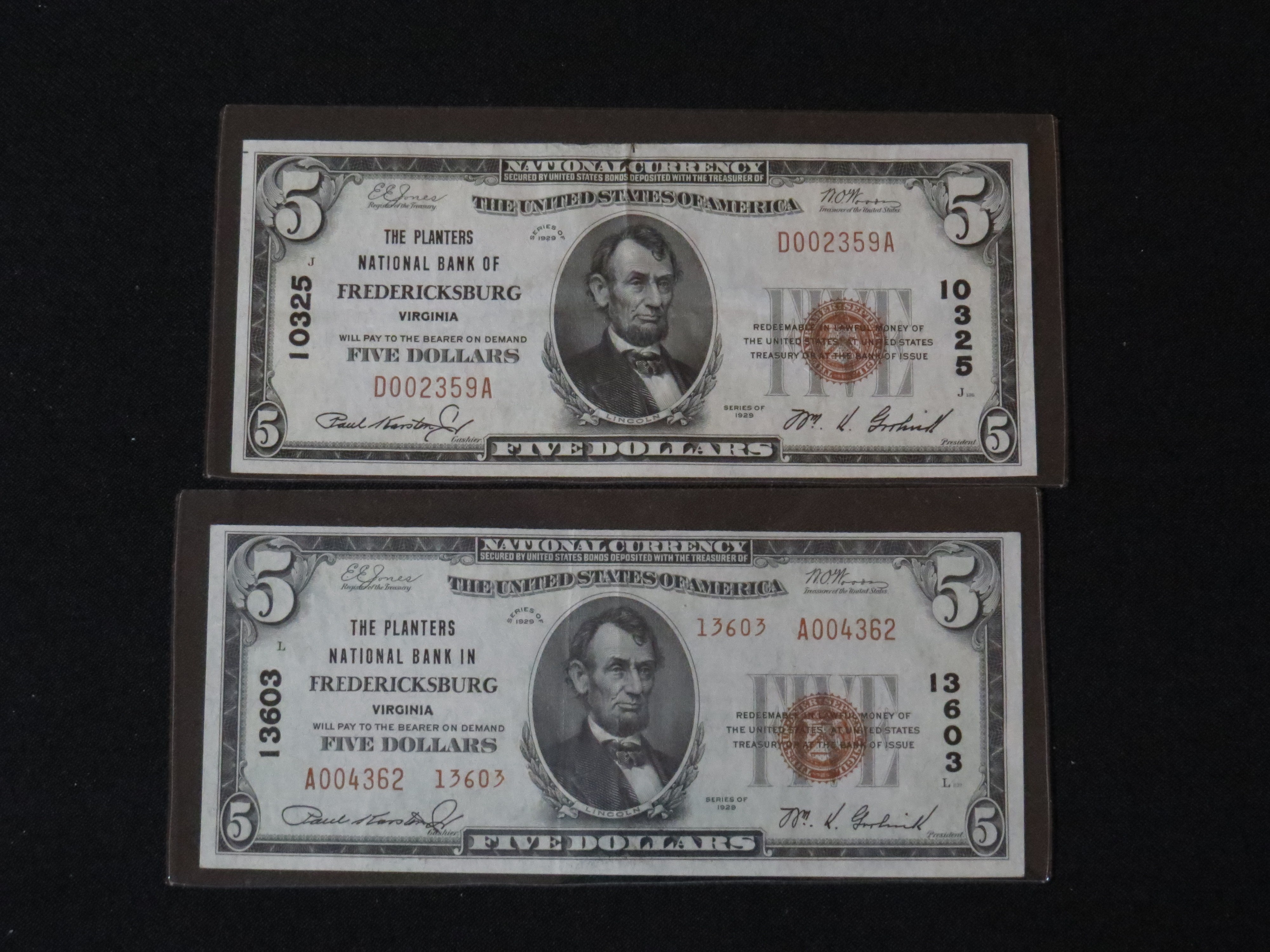 I've been collecting Nationals for a few years but only found out about engraved sigs recently. What did you learn at the National Archives? Are there any articles in Paper Money that have more information?

+1 on the Sweet Springs a tiny bank with a classic name.  Congrats.  If you look at the comptroller's reports, it appears that the bank gave up its circulation privilege in 1924 which explains its tiny outstanding at close (and so few survivors).  Kelly only reported one note for the bank; now there's three but definitely not enough to go around. Also it appears that the sigs are Peacock as prez and Haynie as cashier which is interesting because Haynie was only listed as the bank's cashier in the 1919 report, being succeeded by Willie Rothrock.  It'd be interesting to know if Haynie was an organizer of the bank who acted as cashier on an interim basis until a permanent officer was hired.

Also, on its website Equity Bank has a picture of its branch which looks period to the early 1900s.  Not sure if its the bank itself but  here's a link

If your URL is correct, you'll see an image preview here Large images may take a few minutes to appear. Remember: Using others' images on the web without their permission may be bad manners, or worse, copyright infringement.
Cancel
filename
0%
Cancel
(Failed)filename
Unsupported photo file type. Please upload the file as a post attachment instead.
filename strippederror

You need to be logged in to send an email.

Please paste your code into the box below: